Fraud on the (imperfect) market? en

Confronted with claims for damages in the US defendants often argue the investor must show that he relied on the misleading statements. Proving “reliance” can be difficult or even impossible for an investor. Investment decisions are usually based on a variety of factors and these are not always documented. “Reliance” is an even more complex issue in the context of class actions with numerous plaintiffs (amongst them the putative class members). This applies particularly to the certification of the class, since “reliance” is very much an individual aspect while class certification requires “communality”. How to deal with this situation? It goes without saying that a lack of market confidence has adversary effects for society as a whole. A well-balanced solution must make it possible for investors to enforce their rights while preventing at the same time “abusive litigation”.

This solution was found in the form of the fraud-on-the-market theory, introduced by the US Supreme Court about 26 years ago in Basic vs. Levin. The theory is based on the idea that on open, efficient markets (such as those where securities are publicly traded) all material information available is reflected in the share price. In other words: by purchasing or selling shares, an investor presumably automatically relied on the misleading information even when he did not rely directly on the information. To protect the interest of the defendant in some way, this presumption of reliance can be rebutted. The burden of proof has therefore shifted from plaintiff to defendant. 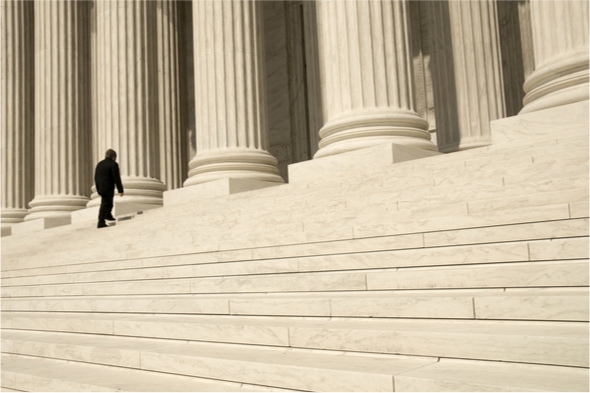 The fraud on the market theory has never been without criticism, but recently in Halliburton Co. v. Erica P. John Fund, Inc. the Supreme Court granted judicial review of the fraud-on-the-market assumption. Petitioners for review claim for example that scholars nowadays reject the theory of (full) capital market efficiency, the very basis of the fraud on the market theory. The numerous “amici curiae”, letters to the court from parties that are not a party in the case themselves, underline the great importance of this discussion.

On 5 March 2014 the US Supreme Court heard oral arguments from the parties. Certain members of the Court seemed to be open to consider a middle ground solution with a pre-class approval event study to verify whether the stock price was affected by the misrepresentation. A decision is expected before summer 2014.

The idea of a rebuttable presumption to assist plaintiffs with proving causation in securities litigation is also known in legal continental Europe, although constructed differently than the fraud on the market theory. The Hoge Raad (Supreme Court) in the Netherlands for example used in a landmark-case regarding prospectus liability (World Online, 27 November 2009, ECLI:NL:HR:2009:BH2162) a rebuttable presumption of causation between the misleading information disclosed in the prospectus and transactions initiated by the average investor (“maatman-belegger”).

Different from the fraud-on-the-market presumption however, it is not the transaction in a share which price was affected by misleading information that lead to the assumption of causality, but causality was presumed as a special rule of legal doctrine in the light of investor protection.

A similar presumption can be found in Belgian legislation (Art. 61 §2, Wet van 16 juni 2006 op de openbare aanbieding van beleggingsinstrumenten en de toelating van beleggingsinstrumenten tot de verhandeling op een gereglementeerde markt, BS 21 juni 2006) on prospectus liability cases. In Belgium the presumption is not limited to “average investors” and the presumption is implemented in legislation. Also German legislation recognizes a rebuttable presumption of causality similar to Belgium in prospectus cases.
While for liability US class actions the decision of the US Supreme Court on the judicial review of the fraud-on-the-market theory is of great importance, it is not likely have an impact on the continental European view on investor protection.

Financial theories of capital markets and the reality of such markets need to be addressed in the legal framework governing investor protection.

Such framework should recognize the “value” of the information disclosed by issuers and its impact on the formation of prices of securities.

Taking into account the specificities of the law, financial theory and investors’ behavior, the current reality of financial markets certainly does not support the disappearance of the fraud-on-the-market theory. Only political motives would, but this would send a negative signal to investors.

END_OF_DOCUMENT_TOKEN_TO_BE_REPLACED

The Dawn Raids App - what’s next?

While lawyers are sometimes portrayed as being too conservative and not (enough) innovative, the recently launched “Dawn Raid App” of international ...