Around 4.000 Madoff fraud victims assisted by Deminor are now at 81,35% loss recovery en

My colleague Valentin Orts and I look back at our over 8 years joined efforts on Deminor’s Madoff Victim Fund claim filing project. In December 2008, the Ponzi fraud orchestrated by Bernard Madoff shocked the financial world to its core and Mr. Madoff’s customers lost their investments overnight. While direct Madoff customers were generally directly compensated for their losses under US bankruptcy law, many (non-U.S.) investors in so called “Madoff feeder funds” were initially left out in the cold. The Madoff Victim Fund that started in November 2013 changed this entirely.

When on 18 November 2013 the Madoff Victim Fund (“MVF”) announced that it began accepting claims of defrauded investors, we quickly understood that it would be impossible for many (non-US) retail investors to file their claim within the initial bar date of 28 February 2014 without professional support and assistance.

Many defrauded retail investors did not speak English or not well enough to answer the numerous questions on the MVF claim forms and even native English-speaking clients struggled with it. Also, as we will explain in the next paragraph, they faced numerous challenges and hurdles additional to completing the claim forms and there was a significant time pressure.

This marked the beginning of Deminor’s MVF claim filing and monitoring project.

In less than 2,5 months around 4.000 claimants residing in 46 countries over 6 continents retained Deminor to file their claims with the MVF.

We swiftly prepared simplified questionnaires and explanations in various languages, including French, Dutch, English, German, Italian, Spanish, Russian, to obtain the information from our clients that we required to prepare the MVF claim forms on their behalf. Many clients were however no longer in possession of the information that was required. Some of our clients did not even know through which bank they invested in Madoff exposed securities or in what Madoff funds exactly. We went at great lengths to assist our clients with obtaining the right information. 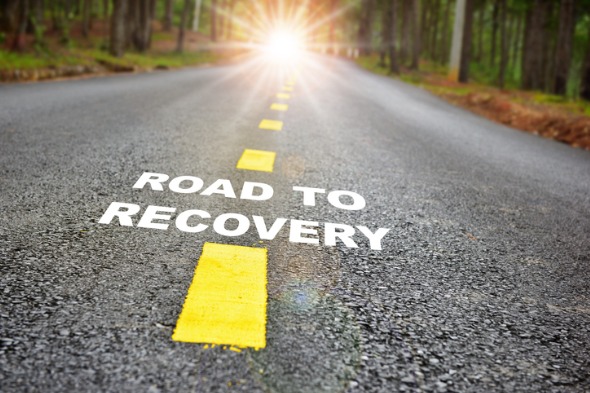 Another hurdle to file the claims on time, was that only natural persons were considered by the MVF as eligible victims. This meant that each time a company or legal entity had made the investment, we had to identify the beneficial owners behind these (sometimes complex) legal structures. In some instances, these legal entities had been liquidated years before the MVF claim filing commenced and accessing the relevant documentation proved very challenging.

Furthermore, each client had to manually sign the claim form and send the original to Deminor. This was a firm requirement from the MVF. It required claimants to print the claim form, date and sign it and send it per courier to Belgium. For some claimants, this posed serious difficulties, as you will see here below in the replies that we received from some of our clients.

We received tons of messages of clients experiencing all kind of difficulties, including the following:

“I am over 80 years old, I do not know how to turn on a PC and I do not have an e-mail address, can you please assist?”

“Currently I am traveling, and I will be in the jungle for around 2 months with very limited access to internet and I have no access to any printing device or a courier, how can I participate to the Madoff claim filing project?”.

“I know that I suffered a huge loss, but I have no clue on which funds and how much. I do not possess any administration any longer, because I moved a lot in my life and I basically dispose of everything every time I move. Please help me!”.

“I do not agree with the questions and information that the MVF requires and I refuse to cooperate, but you must arrange a compensation for me because I am a fraud victim too.”

The MVF itself was created through the efforts of the U.S. Attorney’s Office, which successfully forfeited a series of assets involved in the securities fraud. The fund began its activity with capital of USD 2,35 billion in November 2013. The fund’s capital was further increased to over USD 4 billion in January 2014 with the addition of the proceeds from a payment by JP Morgan Chase Bank. This payment was part of a settlement agreement that the bank reached with the U.S. Department of Justice to avoid criminal charges.

We expected that 10.000s of claims would be filed and, given that the estimated size of fraud is somewhere between USD 50 billion and USD 65 billion, we were rather conservative when it came to the estimated percentage of loss compensation.

After completing the filings in 2014, the MVF disclosed that over 65.500 claims were filed with the MVF for an amount of more than USD 78 billion.

Over the next few years, the MVF reviewed all the claims and send deficiency notices to victims whose claims were not complete, lacked certain evidence or suffered other issues. We were able to cure more than 3.000 deficiencies that were raised over various years by the MVF and achieved that more than 99% of our clients’ losses were approved.

Out of the 65.500 claims that were filed a bit more than 40.000 claims have been approved by the MVF. While the aggregate amount of approved loss remains unknown, it was reduced significantly as victims around the world were unable to cure deficiencies in their claims and saw their claims dismissed or reduced. Consequently, the MVF was able to compensate its eligible victims at a much higher ratio than we could have anticipated in 2013.

It took until November 2017 before the first distribution of 25% loss recovery occurred. Six more rounds followed with the latest one commencing in September 2021 that brought our clients to an 81,35% loss recovery. The graph here below presents the various rounds and loss recovery percentages. 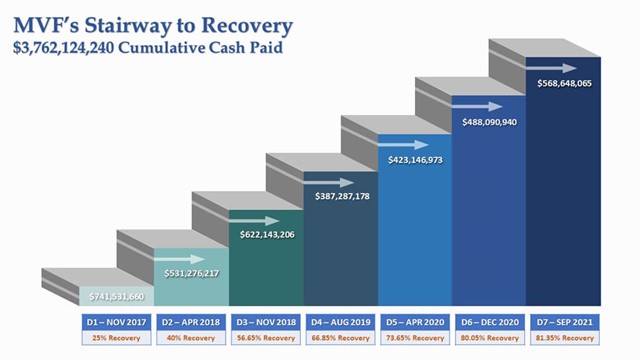 Eight round of distributions and MVF’s expected end game

We expect that there will at least be an eight distribution in 2022 and perhaps a ninth one as well.

It is our firm belief that the MVF soon will send a final formal notification letter to all claimants to see which claimants after 8 years of the start of the MVF are still responsive to MVF’s letters, that still provide information as required by the MVF and that are still in a position to cash the checks that the MVF sends each round of distributions. A failure to respond to that letter within the set deadline, will then then probably lead to an exclusion to participate in the last round(s) of distributions. This will allow the MVF to make one or two final distributions to a group of claimants that can still be considered as “active”.

We are very pleased to see that already such a large part of our clients’ Madoff losses, 81,35%, is compensated already. The MVF is a clear example of how the Department of Justice in the US succeeded in providing a meaningful compensation for defrauded investors in so called “Madoff feeder funds”. This in scarce contrast of similar efforts in, for example, Europe where Madoff related litigation and proceedings are still ongoing and a broad scheme compensating investors’ losses is absent.

Deminor will keep assisting its clients to ensure that they will keep receiving compensations in the next round(s) of distributions.

On January 17, 2012, the Amsterdam Court of Appeals gave its final approval to the pan-European settlement in the pending Converium (Scor) securities ...