The Courts have again made it clear that litigation funding conducted by a responsible funder adhering to the Association of Litigation Funders’ (ALF) Code of Conduct would support access to Justice as envisaged by Lord Justice Jackson and would not be viewed as infringing the rules of champerty.

In a judgment handed down last month, the High Court of England and Wales has clarified several legal principles concerning litigation funding. Reaffirming previous case law by senior courts on the matter, the court held that litigation funding is “beneficial and should be supported” by the judiciary as it is in the public interest to facilitate access to justice. According to Justice Knowles, litigation funding in some cases is the only source of funding available to parties, which further justifies its necessity in the carriage of justice.

The judgment was made in the course of the long-running divorce proceeding between Russian businessman Temur Akhmedov and his former wife Tatiana Akhmedova. In December 2016, the High Court had awarded Akhmedova GBP 453 million, a 41.5% share of the Akhmedovs' marital assets.”Akhmedov did not comply with the court order and according to Justice Knowles, engaged in “contumelious conduct (…) in evading and frustrating the enforcement of the judgment debt”. The court has currently placed a world-wide freezing order on Adkhmedov’s assets.

However, Akhmedova’s legal team argued that the expenses associated with the litigation of the case diminished her chances of enforcing the award, which justified the need for litigation funding. Akhmedova obtained such funding from Burford Capital in 2012. The former couple’s son, Farkhad petitioned the court arguing that the funding arrangement was unlawful and sought an injunction based on the champerty doctrine.

No injunction based on champerty

Until 1967, the doctrine of champerty and maintenance curtailed a wide-spread use of third-party funding in England. Maintenance is the support of litigation without just cause or legitimate concern, champerty is “an aggravated form of maintenance which occurs when a person maintaining another stipulates for a share of the proceeds of the action or suit.” While s.14(1) of the Criminal Law Act 1967 abolished champerty and maintenance as a tort and a crime, public policy against champertous maintenance was preserved by s.14(2) of the same act. However, the judge citing another case stated that this public policy was limited to cases in which third party funders “can exercise excessive control or influence over the conduct of the proceedings in such a way as, for example, to suppress evidence, influence witnesses or procure an improper settlement” (Davey v Money).

In other words, it would require a litigation funder to engage in egregious conduct and interfere with due process in order for the champerty doctrine to take hold. As the court noted “Burford’s mere control would not- of itself- suffice to engage the law of champerty. A funder of litigation is not forbidden from having rights of control but is forbidden from having a degree of control which would be likely to undermine or corrupt the process of justice.”

The court went on to remark that even if Mrs Akhmedova were required to obtain Burford’s consent before settling her case under the terms of the Litigation Funding Agreement, this would not amount to champerty. In the contrary, this would “appear to be a perfectly proper protection for Burford as funder and would not tend to corrupt justice.”  In determining whether a funding arrangement is champertous, the judge further explained, the value of the financial investment is also irrelevant.

Contrary to the defendant’s arguments, family proceedings are not in a unique position with respect to litigation funding. The defendant had argued hat there is a “public policy against champerty on family proceedings which renders the litigation funding agreements unlawful”, however Justice Knowles disagreed with this notion. She found that despite the unlawfulness of conditional fee agreements in family proceedings, concerns about consequential conflicts of interest in a legal team did not apply in the present arrangement, which she distinguished as pure third-party funding.

Interestingly, the court noted that in regard to the application for an injunction it would “not stay a bona fide action even if it were to be supported by a champertous funding agreement.”

Once again affirming established principles behind the use of litigation funding in England, Justice Knowles ruled that there was no need to disclose a funding agreement to the other party and no merit in the court investigating its details, if the funder was a member of the ALF.

Citing Abraham v Thompson, Justice Knowles remarked that “there is some caution against undesirable satellite litigation to investigate funding arrangements in circumstances where the claim is bona fide and the inquiry into funding arrangements would afford no defence to the claim.” If a funder adheres to the ALF’s Code of Conduct, a defendant’s ignorance as to the precise terms of the funding arrangements alone did not justify further investigation into the underlying agreements. Disclosure of the terms of Mrs Akhmedova’s retainer with her solicitors was also superfluous.

Third-party funding as an important part of the judicial process

The demand for litigation funding is on the rise as pressure on fee income increases on law firms, and in-house budgets shrink simultaneously. The Akhmedova decision confirms previous case law and once again assures parties that they can readily turn to third-party litigation finance to support their claims. Nonetheless, this decision is an important milestone, which demonstrates that litigation funding is on its way to becoming a widespread method to seek redress and a vital component of the legal ecosystem. 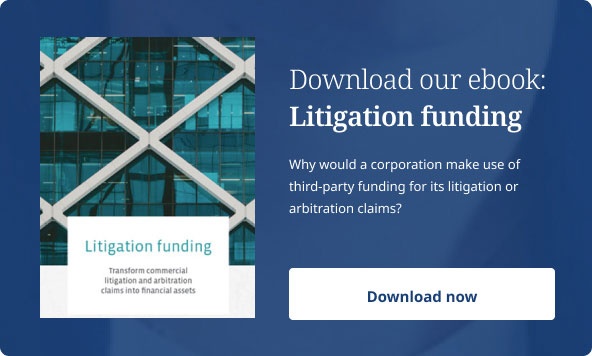